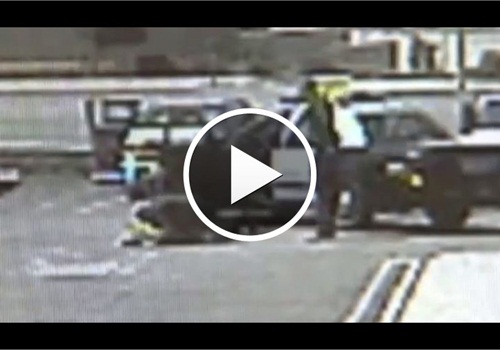 Los Angeles Police Chief Charlie Beck has demoted a commanding officer for his handling of the rough arrest of a 34-year-old nurse in a Del Taco parking lot in Tujunga.

Chief Beck had "serious concerns" about two officers' use of force in the Aug. 21 incident, which began when the officers pulled over Michelle Jordan for driving while talking on a cellphone.

In the video, Jordan can be seen getting out of her car, after officers pull her over. The officers can be seen slamming her to the ground, after she approaches them. Jordan is then handcuffed and slammed to the ground a second time.

The officers also appear to give each other a high five.

The officers have been taken off field duties. Capt. Joseph Hiltner, a 34-year LAPD veteran and commander of the Foothill Division, has been reassigned. Hiltner did not report the incident to supervisors or remove the officers from the field, reports the Los Angeles Times.

"I believe the commanding officer of Foothill Area was severely deficient in his response," Chief Beck said in a statement. "Every Los Angeles Police officer, regardless of rank, will be held accountable for their actions."

One of the officers involved was a 22-year veteran of the force, while the other was a probationary officer with just 10 months on the job, reports KTLA.

Beck has mandated that the video be played at all roll calls and that commanding officers attend and discuss use of force issues throughout the department.