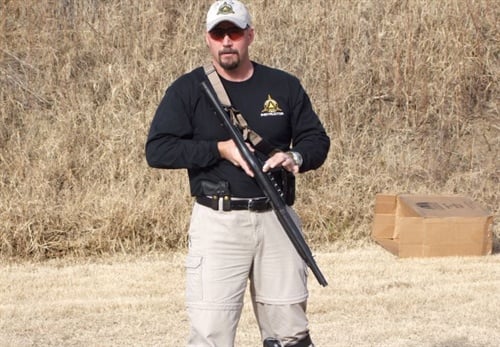 The U.S. Shooting Academy (USSA) in Tulsa, Okla., is a play land for big boys who like toys that go bang. The facility is a shooting range, training academy, and pro shop. USSA has hosted numerous national shooting championships and firearms trainers, and offers some of the most diverse shooting courses in the business.

Their tactical shotgun course will teach you how to effectively run your pump or semi-automatic shotgun. You'll be given considered opinions about accessories and improvements to enhance your shotgun for your purposes. Also, the staff won't be bashful about telling you what they've found not to work.

After going over the differences between a pump and semi-automatic action shotgun, we moved to discuss a long gun's most important accessory—a sling.

Yes, there are many versions—single-point, two-point, or three-point. My personal choice is a two-point, because it's simple and easy to use and models from Blue Force Gear or Viking Tactics allow you to easily transition to your non-dominant hand. Mike Seeklander, the lead instructor, favors a single-point for the speedy transition from strong to weak hand. I find they don't give enough control when you transition to a sidearm or when you need to let the gun hang; the two-point sling keeps the shotgun where you let it hang.

We also covered the importance of an auxiliary ammunition supply using a side saddle or stock saddle. You need to carry more than the capacity of the shotgun. Once you start running a shotgun, you'll go through the magazine load in a hurry. If a shotgun is your primary weapon, you may want to consider a belt carrier—California Competition Works or BlackHawk are excellent options.

During this section of the class, we looked at loading the shotgun and the difference between an emergency and combat reload. It's simple. Anytime you're empty, it's an emergency. A combat load is simply keeping the gun topped off and should be done through the magazine port.

Next, we discussed sights. Do you have a bead, rifle sights, ghost ring, or a red dot? The bead is easiest but you must know you hold over when using slugs at distance. Rifle sights and ghost rings are accurate and easily adjusted to zero the impact of rifled slugs. Red-dot sights are fast and accurate; just make sure you have back-up sights because batteries die and electronics fail.

The first thing we did at the range was to set the slings so the butt of the shotgun was resting near the pocket of the shoulder. That is where you mount the shotgun. We then discussed mounting and the shooting stance; it must be stable and aggressive to help mitigate recoil.

After learning to mount the gun, it was time to get busy zeroing your shotgun with slugs. This was done first at 10 yards and then prone at 50 yards, which is about the upper limit of range when using a shotgun for self-defense or duty. Next came patterning your shotgun with your chosen self-defense load, which is most often "00" buck shot. This is generally an 8-9 pellet (.32-caliber) payload, and is generally effective out to 25 yards. Further than that, and the pellets disperse widely to be accurate.

We then went to work. We transitioned to bird shot, since it's cheaper and easier on the shooter; most drills were done at 10 yards. We quickly learned that you can top off your gun from the on-board carrier and then top it from your personal carrier. This keeps you in ammunition during long strings.

Most training at USSA is done on steel to give you instant feedback. Also, if you didn't do this you'd be changing targets every string. The tactical shotgun course has lots of long strings involving multiple targets. It teaches transitioning to your handgun, reloading both, and continuing the fight.

At USSA, you will learn how to efficiently clear jams when they occur. Shotguns are not known as jam-o-matics. A round-cycling malfunction usually occurs with a short stroke of the pump or a very light load with a gas gun; simply finish the stroke or manually eject the shell. The fastest way is to transition to your backup. After that, clear the shotgun any way you can.

USSA stresses multiple threat engagements. Balance from a solid stance is required to make the shots and stay in the fight. I was amazed what a small shift in weight forward does for recovery from shot to shot.

Scott Smith served as an active-duty Army MP and in the U.S. Air Force Reserve and Air National Guard as a security policeman. He serves as a federal police officer for the Department of Veterans’ Affairs.

Scott Smith served as an active-duty Army MP and in the U.S. Air Force Reserve and Air National Guard as a security policeman. He serves as a federal police officer for the Department of Veterans’ Affairs.