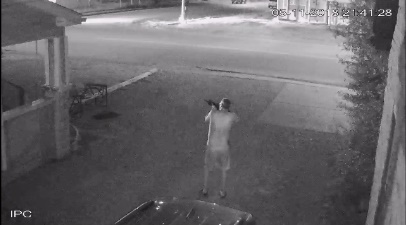 An active shooter who opened fire on his Evansville, IN, neighborhood Friday night with an AR-15 and a shotgun was targeting law enforcement in a planned ambush, officials believe. The gunman was killed but not before he killed a man officials think he mistook for an officer.

The suspected gunman Barry Freeman was shot twice in the chest by city police detective Kyle Thiry about an hour after police arrived on-scene, according to the department. Freeman, 51, died Sunday night at a local hospital.

City police spokesman Sgt. Jason Cullum told the Courier-Press that investigators believe Freeman was aiming specifically at police officers and police cars. In the surveillance video, civilian cars pass the suspect, and he does not fire at them.

“He had a neighbor actually tell him to get back in because there was an active shooter," Cullum said. "He told the neighbor that he was the active shooter."

At least four homes and two businesses were damaged in the gunfire, Cullum said. Three Evansville Police cars and one Vanderburgh County Sheriff’s Office vehicle were shot, including one car that had 23 bullet holes.