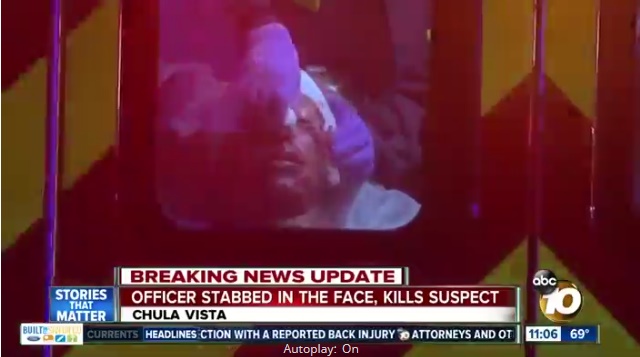 Two officers got a call from a resident on Melrose Ave. who said a man threw a piece of concrete the size of a baseball at his head around 9 p.m.

The officers determined the man was at a home on Monterey Ave. and went to the address at 10:25 p.m., police said.

A woman opened the home's front door to the two officers.  The man began assaulting the first officer, police said, and they scuffled.

Police say the man stabbed the officer up to half a dozen times in the head and face. The officer fired several times in self-defense, police said.

At least one shot hit the man, who died on his way to the hospital.  Chula Vista PD identified him as 27-year-old David Scott.

The second officer and the department chaplain, who was on a ridealong, were able to assist the injured officer. He was taken to UCSD Medical Center in Hillcrest. He did not require surgery and is expected to recover.