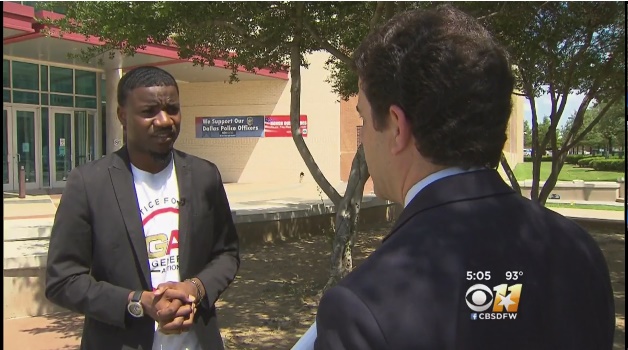 The Dallas Police Association is against Dominique Alexander of the Next Generation Action Network (NGAN) interviewing the seven finalists to become the next Dallas Police Chief.

He’s is one of 56 panelists from various neighborhood groups and police-affiliated organizations selected by Dallas City Manager T.C. Broadnax to speak with the candidates and then give him feedback.

“The city manager is new, he may not have been aware of some of the difficulties we’ve had in the past and his rhetoric. We are not too happy about this,” said the secretary-treasurer of the Dallas Police Association, James Parnell.

NGAN planned the protest march in downtown Dallas July 7 of last year.It was toward the end of that march, when a sniper — unaffiliated with the group — killed five police officers in an ambush.

President of the National Latino Law Enforcement Organization in Dallas,George Aranda, said emotions are still raw among rank and file officers. “I think it’s out of bounds. It’s out of order and our association is not supporting it.”

Alexander insists he is not against the police. “It’s always about the policies and laws that allow rogue officers to get away with murder,” he said.

The Black Police Association of Greater Dallas said it supports the process set-up by the city manager, CBSDFW reports.