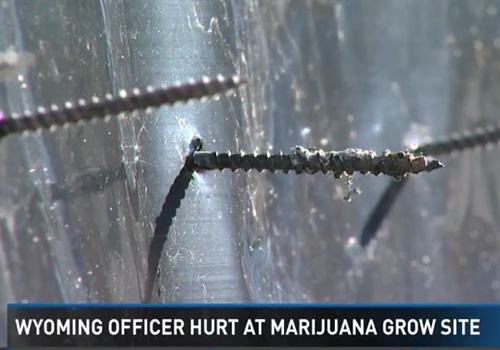 A bed of screws set up to protect a marijuana grow operation seriously injured a Michigan police officer there to investigate a break-in, reports WZZM.

Wyoming, MI, Officer Dustin Cook was investigating an early Sunday break-in at a licensed medical marijuana grow site when he scaled a gate to reach a broken window. On the other side was a sheet of plywood with more than 100 three-inch, threaded decking screws pointing upward. Both of his feet were impaled.

"He had three of these things go into his feet,'' Wyoming, MI, Police Chief James Carmody said, holding a decking screw. "One in one heel and two in the other foot. One went through the center of his foot and did some damage to one of the tendons.''

Officer Cook, a six-year veteran, is in a lot of pain, the chief said.

Carmody says he is mystified why the grower felt the need to use a bed of screws when the building had a working alarm system.

"I was very angry; and when I went to the hospital I was even more angry,'' Carmody said. "He's a good officer, a hard-working officer and he's been taken out of the field because of this idiot's work.''