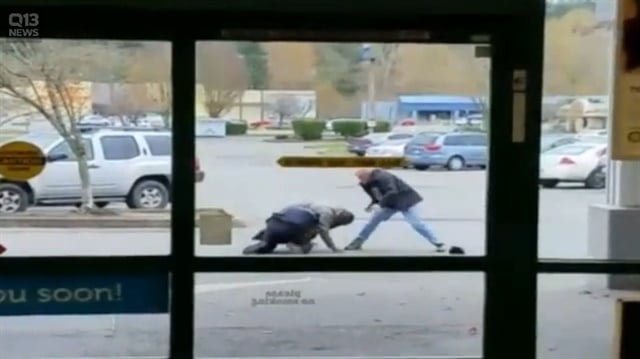 VIDEO: Civilian Comes to Aid of WA Officer Under Attack

Last Wednesday when a Bremerton, WA, officer responded to a call, he came under attack by a violent felon and was assisted in taking the man into custody by a civilian bystander.

The incident, which was captured on multiple cellphone cameras, started as a simple disturbance call. Police said someone called 911 to report a man smashing a nearby restaurant window.

When Officer Spencer Berntsen showed up, the suspect acted hostile and aggressive, according to court documents.

“'Let’s go,’ that’s what he was saying to me prior to assaulting me,” Berntsen told Q13 TV.

In a flash, Berntsen and the suspect were on the ground fighting for control. Then, out of nowhere a stranger, Kelly Bounds, showed up and hit the suspect on his head.

Bremerton Police Chief Steve Strahan said it happened in the nick of time, “An officer is one blow to the head away from becoming unconscious.”

Bounds doesn’t consider himself a hero, just a man who could help out at the right place and time. “People’s lives were on the line,” he said.