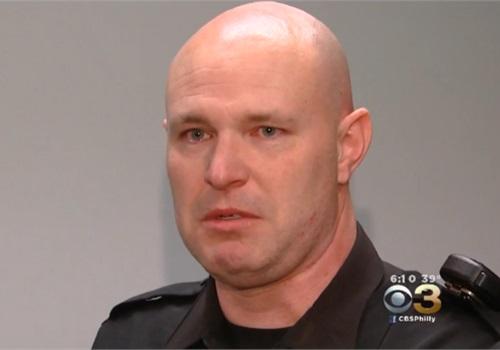 An Evesham, NJ, Police officer is being honored by his colleagues for saving three people during a 10-day span, reports KYW-TV.

Officer Bryan Strockbine joined the force 11 years ago. On March 8th, he got a call about a woman who appeared to be dead on the front lawn.

She was brutally beaten, had no pulse, and wasn't breathing. Strockbine started CPR. After three minutes, she started breathing again.

Authorities say her husband tried to kill her. He was arrested and is behind bars.

"We don't do this job to be thanked or for the recognition," Strockbine tells Eyewitness News. "I love being a police officer and that day made me so proud."

The woman, who does not want to be identified, is said to be recovering. Her son came to the police station to meet Strockbine for the first time. The two men hugged, and cried.

"I love him," Pete Corelli said of Strockbine.

On March 12th, authorities say Strockbine rescued a man from a car accident. The man was unconscious inside a car filled with smoke. Strockbine broke the window and pulled the man to safety.

On March 17th, he rescued another woman with CPR.

Strockbine doesn't look at himself as a hero, but somebody who loves his job.

"I was able to make a real impact on somebody's life," he says.