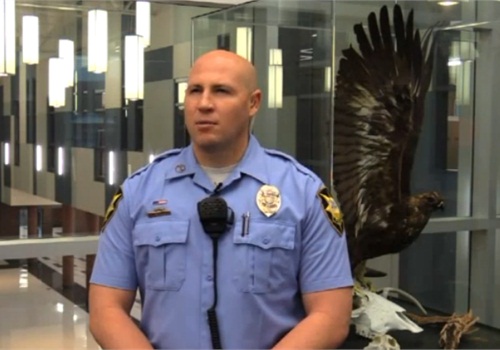 After Megan Rowley had a seizure and went into cardiac arrest at her St. George's, UT, middle school, the school's resource officer Matt Schuman responded with measures that doctors say saved the 14-year-old from death or severe brain damage.

Rowley was one of two lives that Schuman is credited with saving in a single day last week, Fox 13 reports.

Around 1 p.m. Tuesday, Megan called home after she was feeling dizzy in gym class. Then she quickly became violently ill.

When Megan's dad got to the school, she was vomiting, and as they walked out the doors, she fell to her knees.

That’s when Schuman rushed to her side.

Schuman called for an ambulance, and then Megan suffered a seizure.

Megan was in cardiac arrest.

Schuman gave the girl CPR until EMTs arrived at the scene.

The Rowley family is hailing the officer as a hero. But Schuman says he was simply doing his job.

Megan had a message for Schuman: "I would just say, 'Thank you for saving my life.'"

Later that same day as Officer Schuman was returning home from working at a wrestling match, he heard dispatch reporting an infant was choking. Realizing he was just a few doors from the scene, Schuman responded and cleared the infant’s airway, saving the 9-day-old baby’s life.