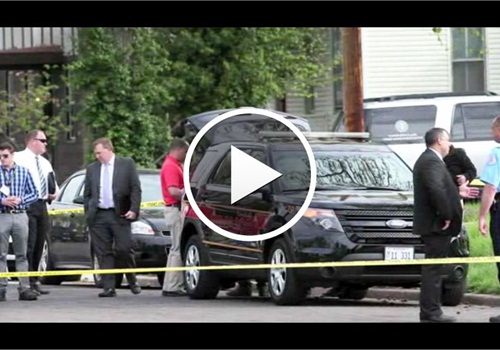 A police officer and suspect were wounded when they were shot in a struggle for a gun as a cybercrimes team served a search warrant at a home in Edwardsville, Ill., Wednesday morning, reports the St. Louis-Dispatch.

Investigators determined that at least one shot had been fired, by a Madison County sheriff's deputy, which might have struck both men. The wounds were not considered life-threatening. It happened after officers knocked on the door of a house in the 300 block of South Fillmore Street about 7:30 a.m. A man who answered pulled out a gun when told they had a warrant, according to Capt. James Morrisey of the Illinois State Police.

The wounded officer, an Edwardsville police detective, was hit in the hand; the suspect, a man in his early 40s, was struck in the jaw. Police did not release either man's name. Both walked to ambulances and were expected to be released later Wednesday from hospital care in St. Louis, Morrisey said.