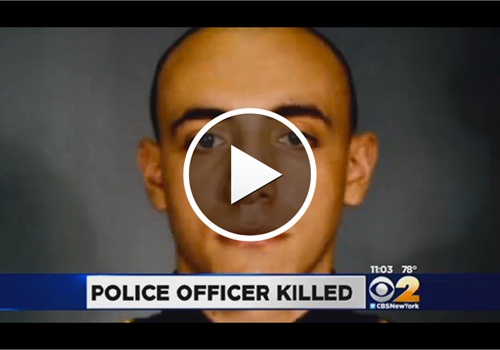 Jersey City (N.J.) Officer Melvin Santiago, 23, was pronounced dead at the Jersey City Medical Center after being shot while responding to a report of an armed robbery at the Walgreens store at Communipaw Avenue and Kennedy Boulevard early Sunday morning, Jersey City Mayor Steve Fulop said in a press conference.

At 4:09 a.m. Santiago and another officer responded to the Walgreens from Bergen and Lexington avenues and were the first officers to arrive at the scene. The gunman, who has not yet been identified, opened fire on the marked police car. Santiago, who was still in the vehicle, was struck in the head, Fulop told NJ.com.

Santiago was rushed to the Medical Center where he was pronounced dead a short time later, Fulop said.

Police identified the alleged shooter as 27-year-old Jersey City resident, Lawrence Campbell. Witnesses say that Campbell ran toward the police car as it pulled into the parking lot and fired through the windshield, fatally wounding Officer Santiago.

Additional responding officers returned fire and the gunman was shot and pronounced dead at the scene. The armed security guard at the Walgreen's stated that the suspect struck him and took his weapon, which police believe was the weapon used in the shooting.

Police say Suffolk County Officer Christopher Racioppo was stabbed during a struggle with a suspect.

When officers entered the bathroom, the student fired at them, striking Officer Adam Wilson, and was hit and killed by return fire from police, said David Rausch, director of the Tennessee Bureau of Investigation.

Investigators are working to determine exactly what happened, but Sheriff Rosie Rivera said everything happened very fast and at least one of the deputies fired back, killing the suspect.

During the chase, the passenger used a rifle to fire at officers as it went through Carroll County and Villa Rica, authorities said.

Iowa Trooper Shot and Killed During Standoff, Suspect in Custody at Hospital

The suspect Michael Thomas Lang ran for sheriff of Grundy County in 2020 and won the Democratic primary with 517 votes.

MS Deputy Killed in Crash while Responding to Call

According to the sheriff's office, Deputy Pat Barnes was responding to assist the Prentiss Police Department in a reported altercation at the Western Motel in Prentiss. On his way, Deputy Barnes lost control of his vehicle and collided with a tree.

Another group of protesters broke into about 20 businesses at a regional shopping center, with some businesses looted, according to the police and local media reports.