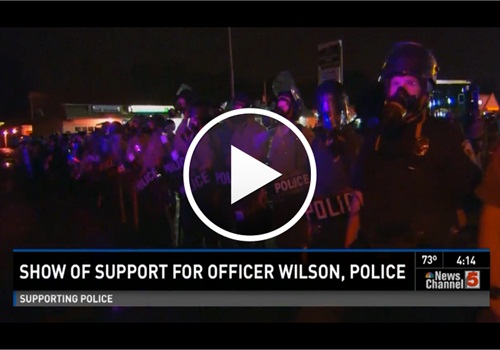 Police associations are using social media to garner support for the police officers working to keep the peace in Ferguson, Mo. Support messages are pouring in on web sites like the St. Louis Police Wives' Association and Facebook.

"One of my best friends got the windshield of their patrol car smashed out while he was in it with a brick. It's a dangerous volatile situation and it's chaotic," said Jeff Roorda, business manager for the St. Louis Police Officers' Association.

"This thing could have turned into a Kent State 100 times over and the fact that it hasn't is a testament to the professionalism of the police in this region who have stepped up in a remarkable way," said Roorda.

On the St. Louis Police Wives Association website, people like A. Rich write, "Prayers for the LEOs and their families. Much appreciation to all the businesses who have stepped up to help us out."