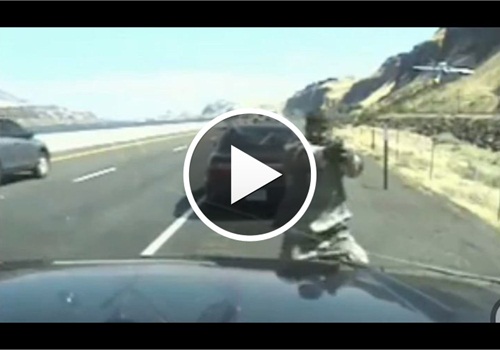 An Oregon trooper's dash-cam video captured a deadly gunfight with a man who charged him and opened fire at a traffic stop in August.

The Oregon State Police trooper survived the assault at the harrowing vehicle stop with a wound to his side, while the suspect died later of a gunshot wound to the chest, reports The Oregonian.

Trooper Matt Zistel pulled over a Cadillac driven by John Van Allen II, 34, for speeding on Aug. 29 on Interstate 84 about 100 miles east of Portland.

The dash-cam footage shows Allen stepping out of the car wearing beige fatigues and assuming a military pose. Allen asks why he has been pulled over and ignores several commands from Zistel to return to his vehicle. Allen then pulls a pistol from his waistband and charges toward the trooper while opening fire.

The trooper returned fire with one shot that struck Allen in the chest. Allen can be seen reloading his pistol while moving along the front of the cruiser. Allen then runs back to his vehicle and drives off. Officers found Allen's car a half-mile away parked along the shoulder. He was dead.