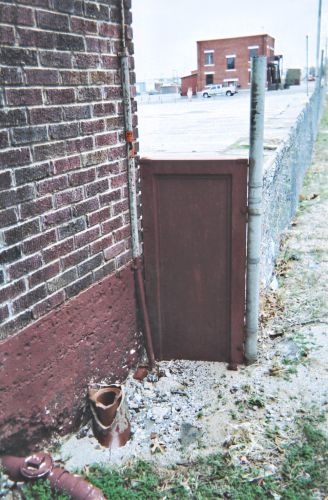 Editor's Note: View photos from the alley to orient yourself as to the locations of the suspect and officers, and the viewpoints they had during the gunfight.

The incident started like a bad joke: "A black guy, a white guy, and an American Indian guy enter a restaurant..."

But what happened when this diverse group walked into a Whataburger fast-food joint in Tulsa, Okla., shortly after 9 p.m. June 10, 1996, was not funny. They made quick work robbing the store, its employees, and patrons.

A short time later, Tulsa K-9 Officer Steve Downie was summoned to a dark alley about a mile from the crime scene to search for a possible suspect. Downie parked at the intersection of 3rd and Greenwood and exited his car, hoping to deploy his K-9.

The sight of a police officer standing in the alley frustrated Downie; he didn't want any friendlies to get bitten. Drawing nearer, Downie recognized the officer as Jim Leach, an officer recognized throughout the Tulsa Police Department as the kind of cop you wanted around when things went bad. His vexation dissipated, Downie listened as Leach explained that he'd seen some movement in the alley.

The two officers decided to drive through the alley. Leach's car with lights on was the lead and Downie's blacked-out unit trailed. After traveling the length of the alley without seeing anything, Downie got his dog out of the unit just as friend and fellow K-9 officer, Dick Hobson, arrived with his dog, Dino.

Neither Hobson nor Downie was wild about searching the alley, but both agreed that the absence of a police helicopter pretty much obligated them to. Given the relative inexperience of Downie's K-9, Hobson suggested securing Downie's dog and using Dino to conduct the search. Downie agreed.

The two men stared down the alley. The rear wall of a brick building formed the east side of the alley, while heavy vegetation draped over an eight-foot-high chain link fence on its west side. The foliage was an ideal place for hiding, a fact that probably wasn't lost upon downtown Tulsa's large transient population. Downie just hoped none would put themselves in the position of being mistaken for a suspect.

Hobson led Dino and Downie into the alley, with Leach bringing up the rear.

The officers had ventured but a few feet into the alley when the place lit up. Downie heard a loud boom, felt his leg swept out from under him, and went down hard to his knees. Trying to stand back up only gave him the sensation of stepping on a high voltage wire, and he dropped back down to his knees, hastily double-tapping in the direction of the muzzle flash.

Their unseen assailant not only had the advantage of surprise, but was cloaked with a cover of darkness. Unable to get a fix on their threat, Downie stared down the middle of the alley in the hopes that his peripheral vision might pick up some movement.

A strangely peaceful feeling washed over Downie. Hobson moaned. And Downie knew that his partner was even worse off than he was.

Down but not out, Hobson fired a volley of shots as Dino stalked in the direction of their assailant's muzzle flash. Hoping that his own rounds might prove at least effective as suppressive fire, Downie double-tapped again. But the sense of tranquility that'd initially enveloped him was now gone, replaced by the certitude that he was about to die.

Whatever his fate, Downie wasn't going to leave Hobson without the benefit of a protective gun and he kept his sidearm trained in the direction of the muzzle flash. Hobson and he were both down in no man's land, bereft of any cover, and backlit by a street light; Downie felt the odds were very much against them.

The sight of Jim Leach advancing down the alley gave Downie a desperately needed shot of hope. With a third friendly gun at play, Downie crawled toward the corner of the building for cover and radioed that shots had been fired with two officers down.

Downie might have been in a world of pain, but he wasn't out of the woods. When the suspect opened fire on them again, Dino rapidly closed the distance on him and engaged, getting in a few good bites and interrupting the suspect's renewed assault.

But then the unthinkable happened. The dog inexplicably let go of the suspect. Worse, it began to double back toward a delivery doorway where Leach had taken partial cover. With each step the dog was unwittingly putting Leach in increased jeopardy by allowing the suspect to zero in on him. Leach yelled, "No!" and with that Dino turned around and resumed his attack on the suspect.

At the far end of the alley, Officer Jack Pike joined Downie at the corner of the building. Pike asked for Downie's flashlight and darted into the alley, taking cover behind the telephone pole nearest Hobson. As Pike wrestled between his desire to extricate Hobson from the alley and a need to neutralize the threat, Officer Walt Milner moved up to join Downie with a shotgun.

Pike and Milner simultaneously illuminated the alley. The officers could now see 21-year-old Steven Williams, some 40 feet away from Pike and leaning against a black steel plate that jutted from the building at its opposite end. Williams had a shotgun in his hands and a .22 revolver in his belt. The shotgun had malfunctioned and Williams was determined to clear it rather than retreat or transition to his revolver. That would prove a costly tactical decision.

Pike, Leach, and Milner opened fire on Williams, who continued to desperately wrestle with the shotgun even as bullets raked his body. Williams went down.

As Corporal Harold Adair grabbed Downie and assisted him out of the alley,  the shooting finally stopped. Then someone got on the radio and asked what Officer Hobson's dog's name was.[PAGEBREAK]

Red flags went off in Downie's mind. Shortly after he'd first joined the department a K-9 officer had gotten killed. In that incident, the dog covered the officer's body and wouldn't let anybody near him. Worried that history was repeating itself, but unable to recall the dog's name, Downie told the firemen who were working on him to get him up and into the alley. Fortunately, his fellow officers were able to get the dog off without anybody getting bitten.

Hobson was loaded up and taken to the hospital, followed by Downie, then the suspect.

Downie couldn't wait to get to pre-op. He'd refrained from examining the nature of his leg injury until he arrived in the ER room. What he saw didn't look good, but it wasn't as bad as he'd expected.

Hobson had been hit twice. And his injuries were much more serious.

Taking what comfort he could in the knowledge that his friend was in surgery, Downie was given morphine, which took about 20 minutes to kick in. He was moved to a room around midnight. He continued to press for information on Hobson. Each time he was reassured that his partner was holding on.

Just before 5 a.m., three other K-9 officers came up to speak with Downie.

"Having grown up in an area where nobody liked policemen, I always thought about shootings," reflects Downie. "So when I got shot, I wasn't shocked or
surprised.

"But I'd never thought about a friend getting shot, let alone a friend getting killed like that. While we hadn't spent much time together off duty, we were close. The day of his funeral was the single hardest day in my life."

Downie had some close calls afterward, too. Three days after his release from the hospital, he experienced extreme pain in his legs.

"The pain was brutal, especially behind my knee," Downie recalls. "I had a blood clot that went from my calf to my upper leg. I went back into the hospital for another week. That started a six-month journey of recovery."

Incredibly, the city of Tulsa did not give Downie injury leave.

"Normally, they would take your sick time until the end of the month," notes Downie. "Then they would give you injury leave and your sick time would be reinstated. But they never recredited me, and after six months, I ran out of sick time."[PAGEBREAK]

"They pretty much said, 'Screw you and screw your grievance.' It was unbelievable," he says.

A local crime reporter who was sympathetic to Downie's plight interviewed the city's director of Human Resources. The situation was eventually resolved, and the following January-more than six months after the shooting-Downie finally got his sick time back.

"They claimed it was just an unfortunate occurrence and that they couldn't contact me. I got really bitter about that. I wasn't going to let them treat me badly just for their recreation," Downie says.

When it comes to evaluating the events of that tragic night, Downie most regrets the lack of an available aero unit. He believes that had one been available, the suspect's location would have been readily identified and that would have prevented any officers from exposing themselves to gunfire. Incredibly, the K-9 Dino never was hit despite the fact that some 54 rounds were fired between Williams and the officers, including Hobson, who emptied his magazine.

Between Dino's courageous engagement of the suspect and the return fire from the officers, Williams suffered wounds to his thigh, hamstrings, chest, and face.

"He was hit 18 times with a combination of .40 caliber and 00 buck shotgun rounds," Downie notes. "Every time Williams would start to move, Milner, Pike, and Leach would resume shooting."

Downie has another regret: Hobson's fateful refusal to wear a vest. Hobson's widow has even told Downie how much she regrets her husband's decision not to wear armor that night. "The fact remains that if he'd been wearing a vest, he would have made it. The impacts would have knocked the stuffing out of him, but he would have survived."

Ironically, the suspect's father had him self been a K-9 officer. Downie believes that Williams was determined to go down fighting, as he could have escaped the alley if he'd so desired. The man's motives will never clearly be known. Neither of his accomplices in the robbery were ever captured or identified.

Downie wishes that either he or one of the other officers on scene had thought to level the playing field by shooting out the light on Second Street that was backlighting them.

"A lot of things seem obvious after the fact," Downie says. "But when there are so many things going on at a particular
moment..."

That particular moment resulted in Hobson being posthumously awarded his Department's Purple Heart and Medal of Honor, as well as those of the Oklahoma Association of Chiefs of Police. Downie received the same recognitions.

Pike, Milner, and Leach each received the Medal of Valor from the Tulsa Police Department and the Oklahoma Association of Chiefs of Police.

Officer Milner retired and passed away within a year of the shooting. Pike and Leach continue to work for the Tulsa PD. Downie has left the agency.

Downie takes great pains to emphasize his debt to each of the men, as well as to the K-9 Dino.

"To think that such an inexperienced dog could do what he did is amazing," Downie says. "And I was blessed by God to have officers of the caliber of Hobson, Pike, Milner, and Leach. Because without them, I'm not here today."