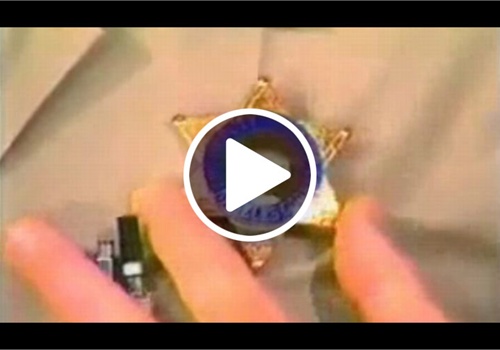 VIDEO: Who Are You?

When I think about the problem of identifying off-duty or plainclothes cops, an incident from the 1980s comes to mind.

A couple of LAPD officers proned out two L.A. County Sheriff's Department gang investigators in the street at gunpoint for some 10 to 20 minutes. The deputies didn't take kindly to getting up-close and personal with the asphalt and, as the minutes ticked by, began challenging the officers' commands and questioning their cranial capacities. Supervisors became involved, bad blood followed, and even today you can find a resulting parody on YouTube (click image above to view).

That clip hasn't aged well, but we LASD-types thought it was hilarious back in the day.

Aside from the usual interagency competitiveness, things are a helluva lot better between LAPD and LASD than they used to be. And if nothing else, the above incident served as a conversational prompt in briefings on how to deal with potentially volatile situations involving people claiming to be cops.

A recent post on Police_L regarding the detentions of people claiming to be law enforcement officers got my wheels spinning on the matter again. The comment provoked the usual predictable debate fodder on whether professional courtesies should be extended, as well as questions on how to verify whether an individual detained really is a cop.

These are legitimate concerns, especially from an officer safety angle. After all, take-over robbery suspects have been known to don raid jackets or flash badges as a means of gaining entry into victims' houses.

Not that there aren't other reasons as to why an officer can feel downright uncomfortable dealing with some dude who's telling them he's a cop. For one, some cops look like dirtbags (and I'm not just talking about undercover types). For another, some talk like dirtbags. In the case of the former, the confusion can be understandable; and in the case of the latter, they may have nothing coming to them.

Then there's a third group: The cop as dirtbag, as illustrated by the LAPD sergeant-cum-burglary suspect who got his ass pepper-sprayed while reportedly breaking and entering into a home. Face it, what with reduced hiring standards and a diminishing number of boy scouts among our ranks, it makes sense to do all we can to assuage our legitimate concerns with minimal aggravation to all parties involved.

To that end, you could do a lot worse than the riddle-me-this Q-and-A thing. Ask the subject about penal codes, vehicle codes, the radio codes of his employing agency-these rank pretty high on the list of things a street cop should reasonably be expected to know. They're not exactly labor-intensive and leave your hands available if need be. Of course, fair's fair and I would hope that you know the answers to the questions you're asking. (In other words, you may want to refrain from asking the average cop claimant what roles Judeo-Christian ethos played in the development of Western civilization and judicial law.) If you and the detainee are on the same page answer-wise, it should go a long way toward removing any doubt you might have as to an individual's claims of being a cop.

For believe me, if you haven't yet had contact with an off-duty or plainclothes cop, the odds are that you will. And when it comes to separating the good guys from the bad and the wannabes from the real thing, it's better to ask what an "Adam Henry" is than to act like one.

I'll bookend this blog with another LAPD/LASD-related "I'm a cop" anecdote, one that comes from my personal experience.

One night I was driving home from work when another driver and myself got entangled in a wee bit of the ol' road rage. Being a couple of numbnuts, we registered our mutual discontent with some finger-flipping before stopping roadside to challenge one another's character and birthright. Eventually, my newfound playmate identified himself to me.

"I bet," he said before skewering me with his closer. "Probably LAPD!"

And with that I realized I'd been arguing with a fellow deputy sheriff.

How Robots are an Effective Tool for Law Enforcement

Robots have the capability to save lives of officers, citizens, and suspects. That's why they can be essential equipment for your agency.