} What is Going on In San Francisco? - Patrol - POLICE Magazine
Close

Accountability. Citizens expect it, protestors demand it, and police overseers are big on it.

But one might reasonably ask where accountability comes into play when people happen upon a scene and start acting like idiots, as they did just seconds after the shooting of a 19-year-old in San Francisco earlier this month.

Yelling, "F**k the police!" they collectively put police officers in one hell of a precarious situation while fomenting a potential riot. But more than the spontaneity of this wanton belligerence, it is the visible lack of response by law enforcement personnel that concerns me.

The French writer Moliere observed that it is not only what we do but also what we do not do for which we are accountable. And just as the mob in question was essentially guilty of yelling "Fire!" in a crowded movie theater, the officers on scene had their own responsibilities. They were responsible not only for getting treatment for a wounded suspect but for preservation of both the crime scene and their own safety. That safety includes not just the immediacy of the moment, but also long-term considerations such as incurring any needless civil liability or undue stress.

I readily acknowledge that the videos taken at the scene capture only part of the day's incident, but what was captured doesn't look good. To paraphrase Churchill, this was not the SFPD's finest hour.

Sure, many of the officers have their guns—even long guns—at the ready. But conspicuously documented is a reticence of anyone to take assertive control of the situation, to quell what could have easily escalated into a much bigger problem. Now if I'm off base here, then feel free to disabuse me of my mistaken notion. But please watch the video and answer the following questions when you do:

That last question is perhaps as good a place to start as any. In fact, I think I can even tender some reasonable speculations as to why Bay Area cops in this day and age might hesitate to respond to a situation as any judicially sanctioned "reasonable cop" would. 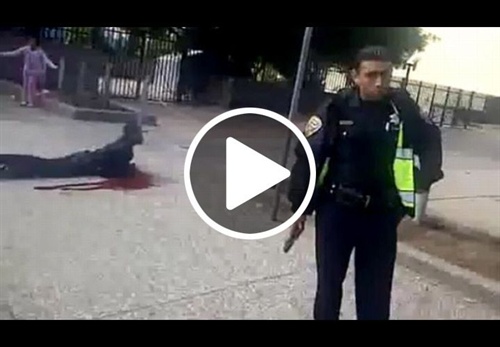 First, there is the anti-cop history of the Bay Area, which stretches back decades and includes attacks on police by the Black Panther Party and the Weather Underground. Say what you will about Hollywood, but when it comes to creating a great "fish out of water" angle, the movie makers could have done a helluva lot worse than dumping "Dirty Harry" in what was arguably ground zero for today's trenchant liberalism.

Many have said that lawsuits against cops by the ACLU and other litigants have fostered a climate where officers are afraid to do their jobs and felonious-minded souls become emboldened. Personally, I would hold Jesse Jackson and Al Sharpton and their ilk no less accountable when it comes to inhibiting officers from doing what they otherwise intuitively, instinctively, and intellectually recognize must be done.

And while I'd like to say that we're entirely blameless, it's hard to ignore terrible incidents like the notorious BART shooting. That kind of mistake doesn't exactly help foster convivial relations with the community.

Given the realities of being a cop in San Francisco, I am not shocked to find such portraits of indecision on display during the aftermath of this officer-involved shooting. Disappointed maybe, but not shocked.

Still, one has to ask yet another unpleasant question: Could this situation have spiraled even more out of control?

Well, given that someone in the crowd was able to retrieve the suspect's gun and take off with it, I think this situation could have really escalated.

It's bad enough that someone in the crowd walked off with the suspect's .380 ACP semi-auto. But consider the effect of seeing the suspect as an "unarmed man" on the mob itself.

Fortunately, the person accountable for grabbing the gun was identified and the suspect's weapon eventually recovered. Moreover, it turns out that the decedent, Kenneth W. Harding, was the suspect in a murder that'd been committed only days before. So its become a lot more difficult for cop haters in the Bay Area to paint him as an "innocent victim gunned down by the cops."

It's sad knowing that the people hyper-bloviating at the scene will never be reflective enough to recognize their own hypocrisy in passing judgment on the "PO-LICE" for being precipitous in their judgment. After all, the mantra-like incantation of "YOUR CAREER IS OVER!" can be heard repeatedly on the audio of one of the video clips. And if that's not prejudging the situation then I don't know what is.

The mob's verdict like their judgment turned out to be very wrong. San Francisco's coroner ruled that the suspect was killed by a self-inflicted head shot.

Sitting here some 400 miles south, I guess it'd be easy for me to point a pious finger at San Francisco coppers, too, save for the fact that they've no monopoly on needlessly refraining to act. That same mentality has been witnessed here in L.A. County and elsewhere. One helicopter observer once told me that he wanted to transfer to another agency. When I asked why, he said, "Because I'm sick of circling above deputies who stand around with their thumbs up their asses waiting for a sergeant to arrive before taking control of situations."

Sadly, it would appear that American law enforcement has lost much of its willingness to take the initiative and restore the peace. We've come a long way from the days when the Texas Rangers boasted they only needed one Ranger to end one riot.

Defensive tactics instructors emphasize the need to have a survival mindset and get safely home at the end of the day. In contrast, the brass and administrators tell officers to mind your P's and Q's, don't rub anybody the wrong way, and for God's sake don't do anything to jeopardize that promotion or transfer that you so covet.

Regardless of which philosophy one ultimately subscribes to, there are clear-cut occasions for officers to act. And this incident was plainly one of them.

Stephen R. Covey once said that "accountability breeds response-ability." Officers and the administrators that would send them into harm's way would be well advised to remember that.

Because when you do things by the numbers and respond appropriately, the converse will be true, too: You'll have "account ability"—and be able to justify your every action and inaction later.

How Robots are an Effective Tool for Law Enforcement

Robots have the capability to save lives of officers, citizens, and suspects. That's why they can be essential equipment for your agency.