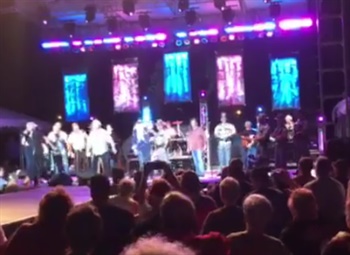 When troopers at the Kentucky State Fair posted a video lobbying to perform with the Oak Ridge Boys at their concert, they probably didn't expect to be taken seriously.

Trooper Robert Purdy and Trooper Corey King posted a video of the two of them singing the hook from the band's famous song "Elvira" and joked about joining the group onstage.

The video made its way to the band, who not only appeared in one of the duo's daily State Fair videos but also invited the Troopers to come up on stage, Lex18 reports.