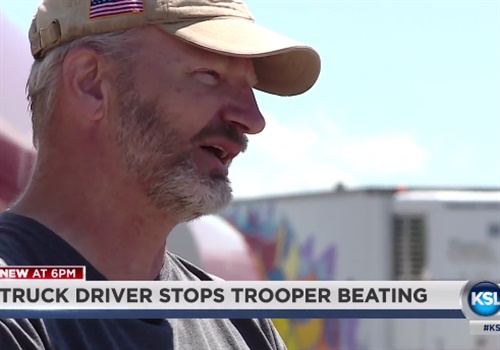 Darren Phillips was driving east on I-80 when he came over a small hill and saw a Wyoming State Trooper and Dustin Roberts, 36, of McKinleyville, CA, who the trooper had pulled over.

"I could see the two of them wrestling around and fighting and there was nobody else around," the truck driver told KSLTV.

Right away, he knew he had to help. So, he stopped his 18-wheeler in the passing lane next to where the trooper's car was parked.

"I put my brakes on, and I jump out and by this time, the trooper is on his back and the guy is on top of him. The trooper saw me running over and as soon as I got up to him, he says, 'He's going for my gun.'"

So Phillips put Roberts in a choke hold until another trooper arrived.

The trooper had some minor cuts, but he's expected to be OK.