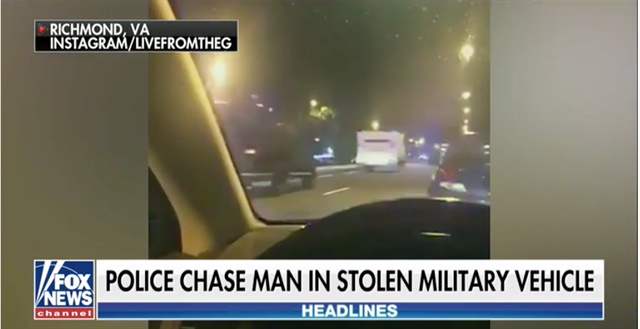 A solider stole an armored personnel carrier from a Virginia National Guard base and led authorities on more than a 60-mile chase while under the influence of drugs before being arrested in the state's capital city on Tuesday, officials said.

Virginia State Police said in a news release the incident began around 7:50 p.m., when the M577 armored personnel carrier was driven away from Fort Pickett in Nottoway County. The tracked military vehicle was not equipped with any weaponry and is the property of the Virginia National Guard.

Police identified the driver as 29-year-old Joshua Philip Yabut of Richmond, and said he was arrested for driving under the influence of drugs in addition to being charged with felony counts of eluding police and unauthorized use of a vehicle, Fox News reports.

After being stolen from Fort Pickett, state police said the personnel carrier was driven east on Route 460 and then north on Interstate 95, hitting a maximum speed of about 40 mph as authorities pursued the vehicle.