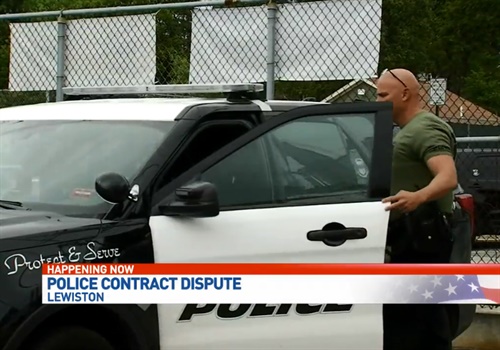 Lewiston, ME, police union representatives say that officers are "ditching their uniforms to show 'dissatisfaction' over contract negotiations with the city," according to WGME-TV.

Officers debuted the dark green shirts last week saying that there will be any interruption in police services, but "they are hoping to make a strong statement," according to the report.

The officers' contract with the city expired on June 30 — one of the big sticking points is pay. They say smaller departments with fewer calls are making more money.

Officer Nicholas Wiers reportedly said, "We're still out here. They still know who we are, but it's a way for people to look at us and be like, 'Hey that's weird. What's going on? Why are you guys wearing the green T-shirt?'"

Officers reportedly said they plan to wear the T-shirts until they reach a new contract.

"City leaders say anyone questioning the legitimacy of any officer can call 911 and request one of the supervisors, who will remain in uniform," according to WGME-TV.