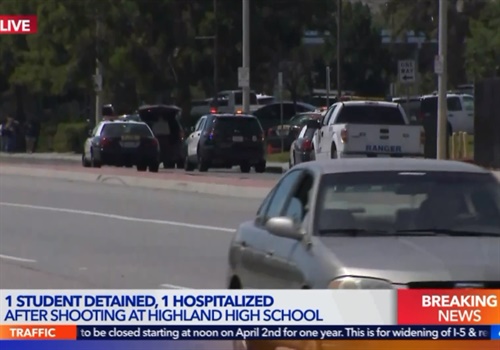 A 14-year-old former student is in custody after allegedly shooting a current student in the arm with a rifle at Highland High School in Palmdale, CA, Friday morning, sparking a major response from deputies.

Deputies were sent to the school after receiving a report of an "active shooter" about 7 a.m., Los Angeles County Sheriff's Department Capt. Darren Harris said.

Authorities responded within five minutes, soon learning that a 14-year-old armed with a rifle had fired and struck another student in the arm, Harris said.

The wounded teen was taken to a local hospital in good condition and is expected to make a full recovery, Harris said. Authorities initially said the victim was also 14, but later stated he was 15 years old, reports KTLA.

The shooter fled the campus with the gun but was taken into custody some distance away, the captain said. CNN reported the teen was caught near a Vons grocery store.

An off-duty Los Angeles Police Department traffic officer who "was in the right place at the right time" apprehended the teen, a desk officer for LAPD's Valley Traffic Division confirmed.