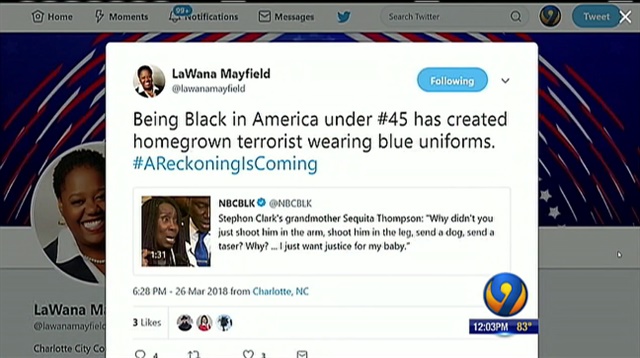 Charlotte City Councilwoman Lawana Mayfield who is known for controversial tweets is under fire for a recently uncovered March tweet in which she described police as "homegrown terrorist wearing blue uniforms."

The tweet was posted in response to the Stephon Clark shooting in Sacramento, WSOC TV reports.

Charlotte-Mecklenburg Police Department officers said the tweet from Mayfield was inappropriate, especially as they are asking the City Council for a pay raise and are trying to recruit more officers.

Mayfield has been criticized for social media posts in the past. Last month, she shared an article about a conspiracy theory and questioned whether the 9/11 terrorist attack was a controlled demolition.

On Thursday morning, she tweeted, "I have and continue to be one of the strongest supporters of law enforcement but I will NOT turn a blind eye to corruption, assaults, and the killings of unarmed black & brown people. If you are offended by my comments and not the situation YOU need to re-evaluate."

In response to Mayfield's tweet, the president of Charlotte-Mecklenburg Fraternal Order of Police Lodge 9 released the following:

I'm sure you have anticipated a response from the Charlotte-Mecklenburg Fraternal Order of Police Lodge #9 regarding your comments made on March 26th, 2018 stating "Being Black in America under #45 has created homegrown terrorist wearing blue uniforms. #AReckoningIsComing."

I would like to know your intention for distributing that message through social media. What exactly did you intend to gain from such a ridiculous statement? Please, educate me!

Being the President of Charlotte Mecklenburg FOP Lodge #9 and a Charlotte-Mecklenburg Police Officer for almost twenty-four years I understand that I am held to a higher standard than other citizens. My actions AND words are critically analyzed every single minute of my day. You need to be held to just as high of a standard as I am. You were elected as a City of Charlotte leader.

FOP Lodge #9 has been working tirelessly over the past several months to work with Charlotte City Council to improve the compensation and benefits of Charlotte-Mecklenburg Police Officers. With the release of this statement by you, it takes away from the focus that we have worked on so hard to bring forward.

To make this incident even more unbearable, I heard about this yesterday while traveling back from Washington, D.C. after participating in the National Peace Officer's Memorial Service. During a time when we focus on Peace Officers who gave their lives for the citizens, community, and Country I am forced to respond to this statement.

Are you seriously labeling all Peace Officers as terrorists? If so, you are also classifying all those Peace Officers, their parents, spouses, children, and relatives as terrorists. To say the least, you have upset the entire law enforcement community on this ridiculous statement. We are a family and when offended, we are all offended.

I would love to discuss this with you further and invite you to one of our membership meetings. We hold meetings on the first Tuesday of each month with the next one being Tuesday June 5th, 2018 at 6:00 pm.