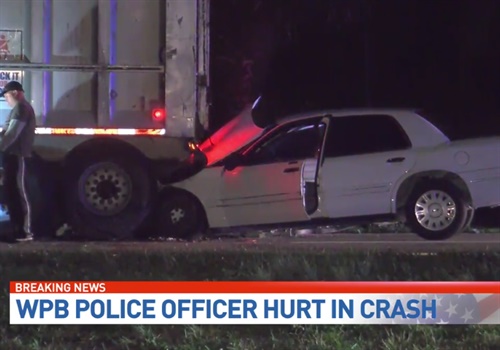 A Florida police officer was seriously injured Monday evening and had to be airlifted after crashing into the back of a semi truck that was already stopped for a previous accident, reports livetrucking.com.

According to CBS 12, the initial wreck began when a pickup truck struck the semi truck while traveling along Beeline Highway in Palm Beach Gardens, and the trucker pulled over to inspect the damage and make sure the motorist was OK.

Sheriff’s investigators say a West Palm Beach Police officer did not notice the semi was stopped and ran into the rear of the semi truck, reports CBS 12.

The front of the unmarked police vehicle became wedged underneath the rear of the tractor trailer.

The police officer was seriously hurt in the incident, but was in stable condition Tuesday. No other injuries were reported.