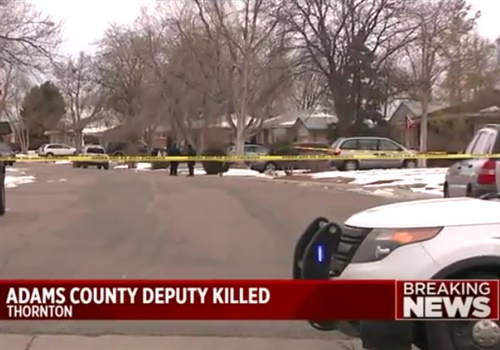 The Adams County, CO, sheriff's deputy who was shot and killed in the Thornton area Wednesday night has been identified as 32-year-old Deputy Heath Gumm. He's survived by his wife and family, according to the Colorado Police Officers Foundation. He had served with the sheriff's office since 2013.

One suspect is in custody, while a manhunt continues for two other suspects.

The outstanding suspects are described as two light-skinned black males or two dark-skinned Hispanic males who were dressed in all black.

The Adams County Sheriff's Office said deputies responded to an assault in progress call around 7 p.m. when a man pulled out a handgun and started shooting, reports KDVR.

Gumm was hit in the chest, according to the sheriff's office. He was taken to Denver Health Medical Center where he was pronounced dead.

One suspect was arrested in a shed in a backyard not far from the shooting scene, law enforcement sources said.

There was a large law enforcement response to the area that included SWAT teams and K-9 units. Residents in the area were told to shelter in place and stay away from windows and doors, as the two suspects at large are considered to be armed and dangerous.