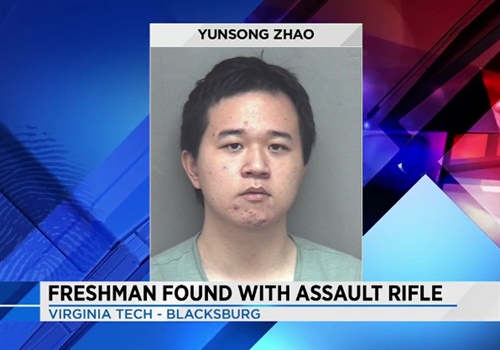 Police have arrested a Virginia Tech student they say illegally had a high-powered rifle.

Virginia Tech police arrested 19-year-old Yunsong Zhao on Monday and charged him with possessing or transporting an assault firearm while not being a U.S. citizen or while not being lawfully admitted for permanent residence to the U.S., according to the arrest warrant. The charge is a class 6 felony.

The warrant also states that per the complainant, in addition to having the rifle, Zhao attempted to buy 5,000 rounds of ammunition, had been researching bulletproof vests, and bought a former police vehicle that still bears some police markings, which he outfitted with a special bumper.

Zhao, who has family in China, has no known criminal history. Virginia Tech says that as of Tuesday, Zhao is no longer a student at the university, though he was one at the time of his arrest.

The university released a statement on its website Tuesday evening, saying in part, "At no time during this investigation did police believe there was any threat to our community, nor is there one now."