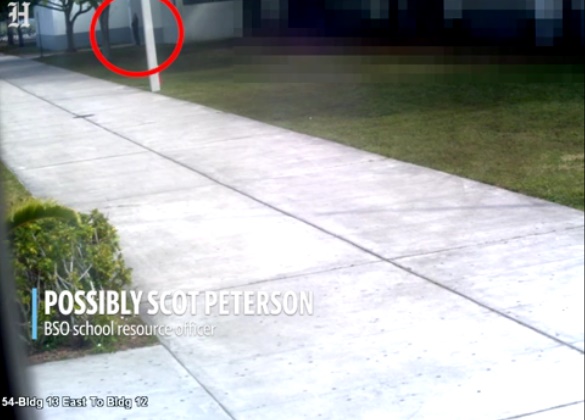 Authorities on Thursday released video surveillance footage showing the outside of the Parkland, FL, high school where a gunman inside killed 17 people and wounded.

Citing “strong public interest,” a Broward County judge last week ordered public release of the four video clips from the surveillance system at Marjory Stoneman Douglas High. The clips do not show the carnage inside Building 12, but depict police response on campus outside.

Exactly how the Broward Sheriff’s Office responded in the initial moments of the Feb. 14. massacre has been the focus of extensive national criticism. When gunfire broke out at 2:21 p.m., school resource deputy Scot Peterson arrived within minutes, but took up a position outside and never entered the building to engage shooter Nikolas Cruz.

The footage released offers a limited viewpoint that focuses mainly on Broward Deputy Scot Peterson. It also has no sound. The original version is more than 27 minutes long.

The video begins shortly after the shooting started, with Peterson and civilian security monitor Kelvin Greenleaf walking. The two then begin running, get into a golf cart and speed toward Building 12, the Miami Herald reports.

The angle of the remaining footage shows the two pull up to the southeast corner of Building 12 as what appears to be a group of students appear to be moving about frantically on a lawn. Peterson and Greenleaf can be seen waving, then the school officer assumes a position that is partially obstructed by a pole. He apparently remains in this area for the rest of the video.