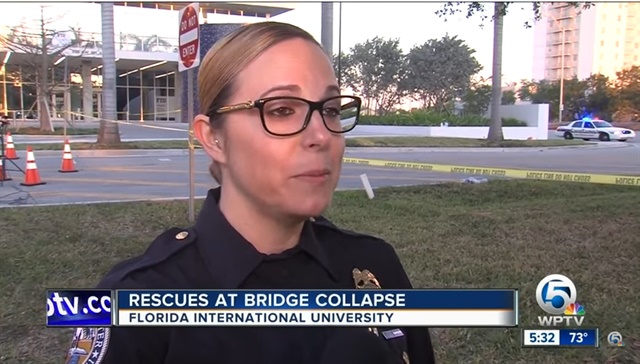 Sweetwater, FL, police Sgt. Jenna Mendez saw the pedestrian bridge fall onto 8th Street next to Florida International University on Thursday -- but it made so little sense, she first thought a demolition crew intentionally collapsed it.

"Why would they have brought the bridge down during the day?" she thought as it fell in front of her, as she was stopped at a red light just one intersection away.

Then she realized cars had just been crushed. Her confusion was over: "This was not on purpose; this was a catastrophe," she told CNN.

Mendez -- had she beaten that red light -- might have been one of the victims of the collapse, which killed at least six people. Instead, she was both a witness and one of the first people to reach the injured in the critical moments after their trauma.