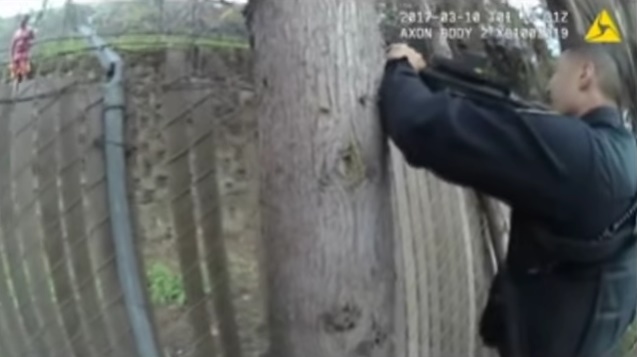 The Santa Clara County District Attorney's office on Thursday cleared a Santa Clara police officer who fatally shot a man who prosecutors said was mentally ill and whom they thought was armed, reports KTVU.

District Attorney Jeff Rosen also released about 10 minutes of body camera video showing the final gunshots that killed Jesus Geney-Montes, 24, and determined that the shooting was lawful: Geney-Montes had stabbed himself with a knife and told police he had a gun and would shoot them, even though that turned out to be false. He had no weapon on him when he was found dead. Still, prosecutors determined the fatal shooting was lawful because the fear for their lives was "imminent" based on what they believed at the time.

The District Attorney said that veteran police officer Colin Stewart – who prosecutors said had been trained for encounters with the mentally ill –  used his Taser first as Geney-Montes rushed toward him, but it was not effective.

"Seeing Geney-Montes charging towards him and believing his life was in danger, Officer Stewart chose to defend himself by discharging his weapon," Deputy District Attorney Carolyn Powell wrote in a 53-page public report. "Under the facts, circumstances and applicable law in this matter, Officer Colin Stewart's use of force was in response to an objectively reasonable belief that he was facing an immediate threat of great bodily injury or death."