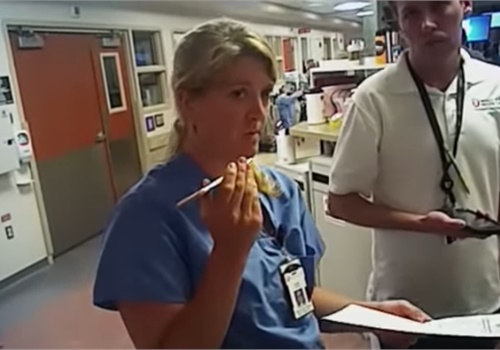 A nurse says she was assaulted and illegally arrested by a Salt Lake City police detective for following a hospital policy that does not allow blood draws from unconscious patients, reports the Salt Lake Tribune.

Footage from University Hospital and officer body cameras shows Detective Jeff Payne and nurse Alex Wubbels in a standoff over whether the policeman should be allowed to get a blood sample from a patient who had been injured in a July 26 collision in northern Utah that left another driver dead.

Wubbels says blood cannot be taken from an unconscious patient unless the patient is under arrest, unless there is a warrant allowing the draw, or unless the patient consents. The detective acknowledges in the footage that none of those requirements is in place, but he insists that he has the authority to obtain the draw, according to the footage. Payne then handcuffed Wubbels and put her in his patrol car.

In a written report, Payne said he was responding to a request from Logan police to get the blood sample, to determine whether the patient had illicit substances in his system at the time of the crash.

Wubbels says she wants law enforcement officers to be aware of the laws and agencies "need to be having conversations about what is appropriate intervention."

Salt Lake police Sgt. Brandon Shearer said the department started an internal investigation, which is ongoing, in response to the incident.