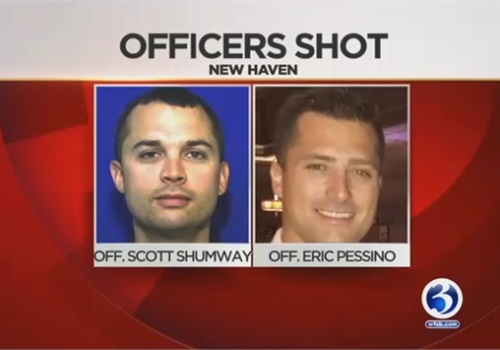 For five hours, officers attempted to negotiate with a man who they said shot his wife and two New Haven, CT, police officers, reports WFSB.

Armored trucks, investigators in SWAT gear, and mobile command centers flooded the street at about 10:30 a.m. on Saturday after reports of gunfire were reported to the New Haven Police Department.

New Haven Officers Scott Shumway and Eric Pessino responded, and entered the house where police said the woman, a retired Department of Corrections officer, said her husband shot her in the hand, arm, back, and chest.

"As they entered the doorway, shots rang out and two officers were shot," said Officer David Hartman.

Police said the victim told them she had been shot at the home across the street. When officers went to enter the home, and breach the 3rd floor door, they were met with gunfire from the suspect.

Hours passed as officers negotiated with the suspect, 51-year-old, John Douglas Monroe, using several tactics including setting off a flash bang that released green smoke into the air. Police evacuated homes in the nearby vicinity.

Shortly before 2 p.m., officers breached the home, and confronted Monroe who was hiding in the basement, armed with a long gun. At which point, responding police fired, injuring Monroe.