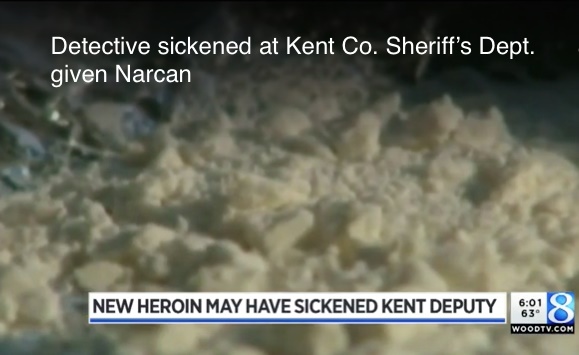 A Wyoming, MI, detective was sickened while testing a white powder at the Kent County Sheriff’s Department Tuesday and was treated with Narcan and rushed to a hospital as a precaution, according to Chief Deputy Kevin Kelley of the sheriff’s department.

The Grand Rapids Fire Department tells WOOD TV a Kent County sheriff’s deputy found the powder during a traffic stop Monday night. The substance was taken back to the sheriff’s department for testing.

“It made a fear of mine come true today. I’ve been talking about it, preaching about it,” said Lt. Al Roetman with the Kent County Sheriff’s Office.

The sheriff’s office says the Wyoming detective with the Kent Area Narcotics Enforcement Team started feeling nauseous and his heart rate increased while testing the unknown substance. His symptoms were similar to those caused by a drug exposure, the sheriff’s department said.