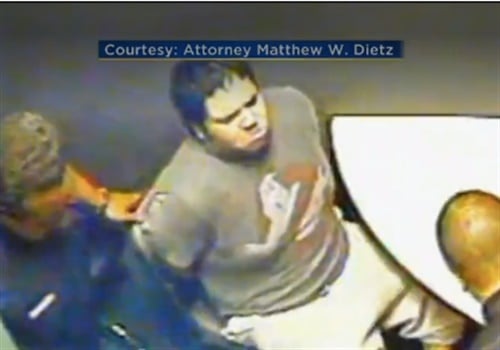 An autistic man's family is suing the city of North Miami, FL, and four police officers, claiming the disabled man's civil rights were violated when he was interrogated after an officer shot his caretaker.

Surveillance video shows an officer trying to question Soto about the incident, but it's clear that he is unable to communicate. At one point, Soto indicates that he wants to have his shackles removed. But the request is denied.

"I'm heartbroken," Miriam Rios, Soto's sister, told CBS Miami. "I feel so guilty I couldn't be there for him. I'm upset in this day and age they can't tell that he's autistic."

The incident happened last July when Soto was in the street with his caregiver, Charles Kinsey. Police say Kinsey was trying to coax Soto, who had a silver tanker truck toy in his hand, back into his group home.

Officers believed the toy was a weapon and fired three rounds, subsequently striking Kinsey in the leg while his hands were raised in the air. Soto was taken to the police department for interrogation following the shooting.