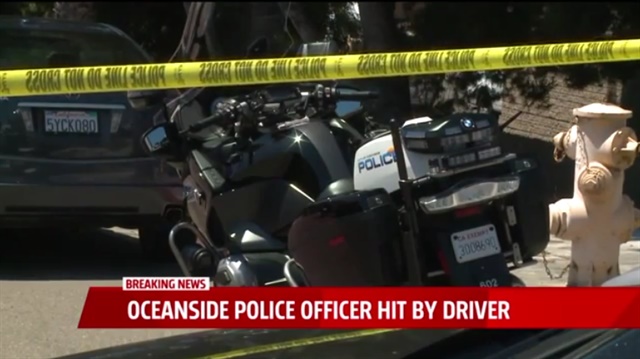 An Oceanside, CA, motor officer was airlifted to a hospital Monday after being intentionally struck by a car, police said.

Officer Brad Hunter, a 29-year veteran of the department, had pulled over a driver on Oceanside Boulevard at Foussat Road at about 10:30 a.m. and was off his motorcycle when he was hit by another car.

The driver who hit the officer accelerated a silver Dodge Neon at the officer and appeared to hit him intentionally, pinning him against the other vehicle, a witness told FOX 5 News.

"It was definitely not an accident," said witness Toni Lassard.

The driver and a passenger fled the scene after hitting the officer, and abandoned the Neon several blocks away, Oceanside Police Department spokesman Tom Bussey said. One suspect was arrested near the car, but the second suspect got away. Police had only a vague description of the second suspect.

Officer Hunter was injured and taken by an air ambulance to Scripps Memorial Hospital. He is recovering from his injuries, NBC San Diego reports.

Roberto Ignacio Flores, 26, of San Marcos, has been booked into San Diego County Central Jail on charges of attempted murder of a police officer and felony hit and run. Police say he was driving the Neon during the incident. The passenger is still at large.