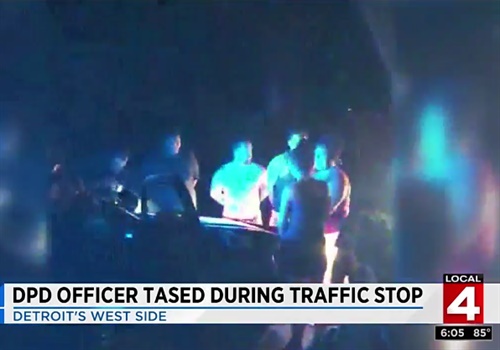 A wild scene broke out Wednesday night in Southwest Detroit when a woman used a TASER on a police officer responding to a call about marijuana, reports WDIV.

Detroit police said officers were responding to a call about children smoking marijuana in a car when neighbors interfered with the police. Officers said the residents weren't just recording video, but interfering with a traffic stop and getting too close. One man was told to get a cellphone out of an officer's face. The disagreement escalated into a physical altercation.

That's when another woman ran into a nearby house and returned with a TASER. She targeted the officers, who were holding her stepson.

"She was coming full force with a TASER and pepper spray to assault those officers," Detroit police Cmdr. Whitney Walton said.

Detroit police addressed the incident Thursday, telling a different story. They said the family was told to stay on the porch, but instead came running at officers.

"They can record," Walton said. "They can observe, just don't interfere."

The man, as well as the woman who used a TASER on the officer, were arrested, and the children in the car were given tickets and released.