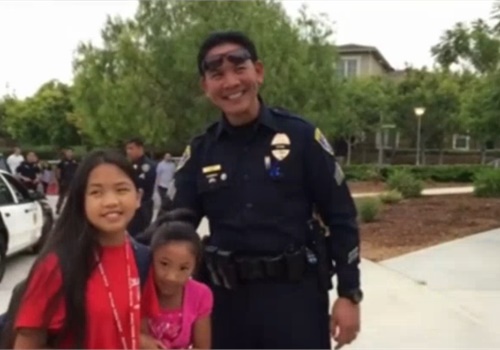 The young daughter of a San Diego Police Department officer killed in the line of duty returned to school in Chula Vista, CA, this week, proudly escorted to campus by a fleet of police officers, reports NBC.

On Monday, at least six San Diego PD vehicles drove sixth-grader Amira De Guzman to Heritage Elementary School. Lights flashing, the patrol cars caravanned into the round-about at the entrance of Amira's school, dropping the girl off for her first day back at school since her father, San Diego PD Officer Jonathan "JD" De Guzman, 43, was killed.

The drop-off was captured on video and posted to the school's "Pray4Us Heritage Hawks" page on Facebook, an online prayer group of parents and guardians from the school in San Diego's South Bay.

With a big smile on her face, Amira can be seen getting out of a San Diego PD car and walking up to her school. "Amira, you're late," someone is heard joking on the video as the girl giggles.

The video shows police officers exiting their cars, smiling and proudly looking at Amira as she approaches the school. The girl turns around and gives hugs to several of the officers.

"We'll see you soon, okay?" one officer tells the girl.

Another officer embraces her, giving her a kiss on the cheek.