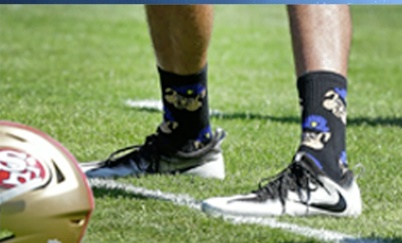 On Instagram, Kaepernick said he wore the socks in practice to make a statement -- but he did so before he took a public stance by refusing to stand for the national anthem at preseason games.

"I wore these socks, in the past, because the rogue cops that are allowed to hold positions in police departments, not only put the community in danger, but also the cops that have the right intentions in danger by creating an environment of tension and mistrust," Kaepernick wrote on Instagram on Thursday. "I have two uncles and friends who are police officers and work to protect and serve ALL people. So before these socks, which were worn before I took my public stance, are used to distract from the real issues, I wanted to address this immediately."

Images of the socks were posted on social media Wednesday night and quickly created a stir, ESPN reports.

"It's just ridiculous that the same league that prohibits the Dallas [Cowboys] football club from honoring the slain officers in their community with their uniforms stands silent when Kaepernick is dishonoring police officers with what he's wearing on the field," Bill Johnson, executive director of the National Association of Police Organizations, said, according to USA TODAY Sports.