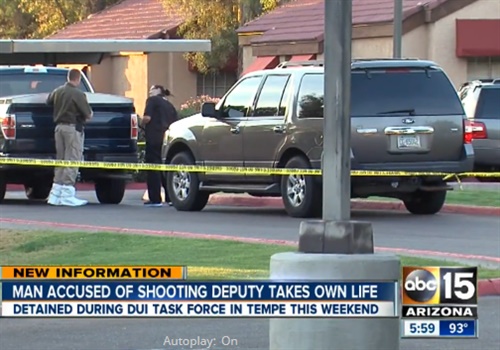 VIDEO: Suspect in Shooting of Arizona Deputy Kills Himself in Front of Detectives

A man suspected of shooting a deputy conducting a traffic stop last weekend shot and killed himself in front of detectives in Tempe overnight, according to the Maricopa County Sheriff's Office.

Detectives reportedly went to a residence where they were going to speak with the suspect. At that time, the suspect, a 51-year-old man, reportedly pulled out a rifle and shot and killed himself. No officials were injured, but SWAT teams were then called in to the scene, reports ABC15.

During a press conference on Wednesday, Sheriff Joe Arpaio said investigators learned that the suspect had been pulled over by a deputy during a DUI task force and his car had been seized.

Several hours later, the suspect reportedly drove by in another vehicle and fired multiple shots at the deputy who was performing a separate traffic stop.

During a press conference, Arpaio said he believes the suspect was angry and targeting cops. The deputy was in uniform, and his patrol vehicle lights were flashing, clearly conducting a traffic stop.