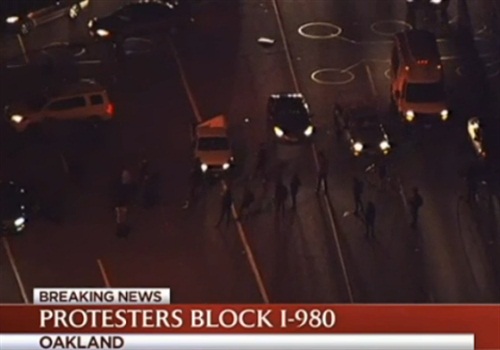 A 24-year-old man shot by police Wednesday afternoon after a pursuit and alleged carjacking attempt in West Oakland died at a hospital from his injuries, authorities said.

The fatal shooting sparked a protest that started in the area of 27th Street and Martin Luther King Way in Oakland. Posts on social media show that at least 100 people gathered in the area at 8 p.m. to protest the officer-involved shooting.

At around 10:15 p.m., video from the NBC Bay Area helicopter showed protesters blocking lanes on Interstate 980 near Interstate 880 in Oakland. Police responded to the area to clear the traffic jam.

Earlier in the day, Oakland Police Officer Johnna Watson said officers spotted a vehicle believed to be connected to a previous armed robbery at 2:39 p.m. in the area of 69th Avenue and International Boulevard.

The officers attempted to pull the driver over, but he fled, leading police on a pursuit through Oakland city streets. An Oakland police helicopter tracked the car during the pursuit, Watson said.

The pursuit lasted about seven miles until the suspect crashed into another car on 27th Street between Northgate Avenue and Martin Luther King Jr. Way, Watson said.

The suspect ran from the car and, armed with a gun, tried to carjack another driver, Watson said.

Arriving officers confronted the suspect, who reportedly advanced towards them with the gun. Three officers opened fire, striking the suspect, according to Oakland Police Chief Sean Whent.