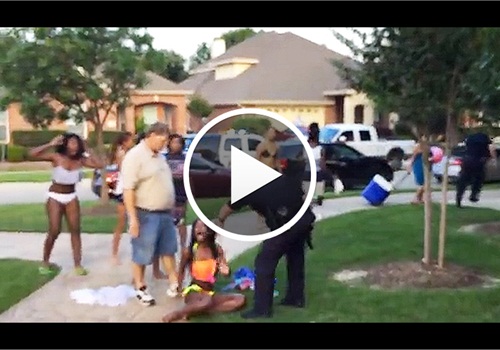 A McKinney, Texas, police corporal was placed on administrative leave after a video surfaced Saturday showing him pulling a 15-year-old girl to the ground and pinning her down outside a pool party Friday night in the expansive Craig Ranch subdivision. Seconds later, he pulled his gun and pointed it at two teens who appear to try to come to her aid.

The profanity-laced seven-minute video, posted to YouTube on Saturday, had been viewed more than 4 million times by Monday. It shows white police officers trying to control black teens who had scattered as officers arrived in the neighborhood, the Dallas Morning News reports.

McKinney Mayor Brian Loughmiller said that he expects city staff and police officials to quickly conduct an investigation into the officer’s actions.