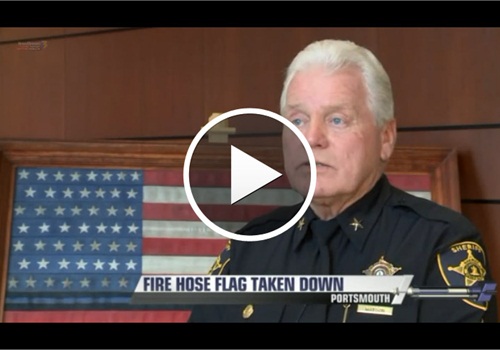 Portsmouth County, Va., Sheriff Bill Watson says he is furious after a group of judges told him to take down an American flag display.

Sheriff Watson said his agency got the American flag display as a gift from members of the Portsmouth Fire Department a few weeks ago. It’s made of old fire hoses with a sign beneath it that reads, “A Tribute to Public Safety.”

Watson said he requested to have it mounted on the wall in the lobby of the courthouse but was shocked when he was told by the judges, “Not only do we not want it on the wall, we don’t want it in the courthouse.”

Watson said, “I just can’t believe that they don’t want to display the American flag in a courthouse, I mean that’s the most asinine thing I’ve ever heard in my life.”

NewsChannel 3 spoke with a judge who didn’t want to be identified about the issue. The judge told us it was decided that the lobby of the courthouse is not the appropriate place for the display.

The judge told News Channel 3 the Sheriff can hang whatever he wants in his office, which is located on the first floor of the building next to the lobby.

Watson says if it comes to it, he will mount the flag in the window of his office and would rather be sent to jail than take it down.

The latest Elite GEN V female concealable armor from Point Blank features a new ventilation system integrated into the carrier and named Eurus, the Greek name for the Southeast wind.

The newly designed Black Eagle Athletic 2.1 T Low features a super lightweight microfiber design, which is extremely breathable so that feet will stay comfortable indoors and out, even in hotter temperatures.

Using 3D metric data collected from thousands of women across the nation, Flying Cross has achieved a fit solution that maintains the authoritative uniformed-look expected.

The Blackinton Breast Cancer Awareness line was developed to raise money for and bring awareness to the fight against cancer.

The straight-leg design of the Shella Pant is clean and simple and 5.11 kept the pockets minimal, so you have a balance between looks and function that are conducive to a variety of activities.