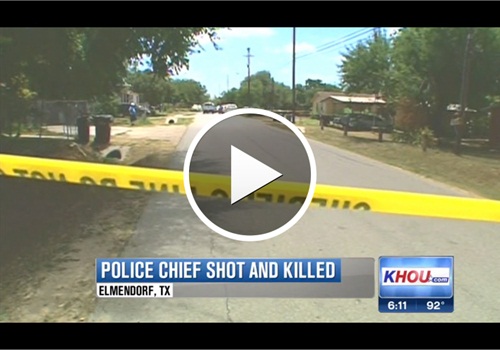 The chief of police in Elmendorf, Texas, is dead after a violent confrontation with a suspect.

Chief Michael Pimentel died Saturday after being shot at least twice by a man he had stopped while on duty.

The Bexar County Sheriff's Office told KSAT 12 that Pimentel died at University Hospital where an AirLife helicopter flew him for treatment of his wounds.

They say Pimentel and a 24-year-old suspect got into the confrontation after the traffic stop around 11:30 a.m.

Pimentel suffered gunshot wounds to his stomach and shoulder during the confrontation.

The sheriff's office says the suspect is Joshua Manuel Lopez.

They say Lopez has an outstanding warrant for graffiti, and will now be charged with capital murder for Pimentel's death.