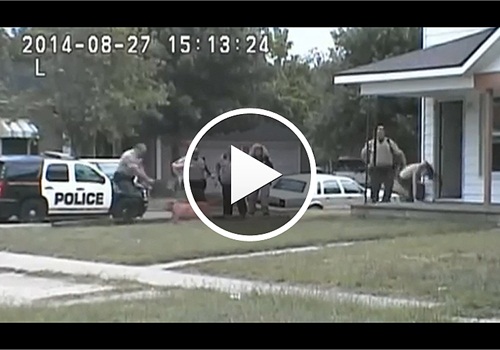 Hutchinson, Kan., police have released a video recording from a patrol car camera of an officer shooting a dog that charged him last week.

Police said the incident occurred after another officer responding to a domestic disturbance call was bitten by the dog, which then went back into the home on West Third Avenue, the Hutchinson News reports.

As several other officers who then responded to the scene and a city Animal Control Officer were standing in the yard, the dog charged out of the open front door, as seen in the video. The officer fired twice as he ran backwards, striking the dog with at least one shot, before the officer fell to the ground. Two other officers drew their weapons but did not fire.

The pit bull, then removed from the home by Animal Control, later died from its wounds.