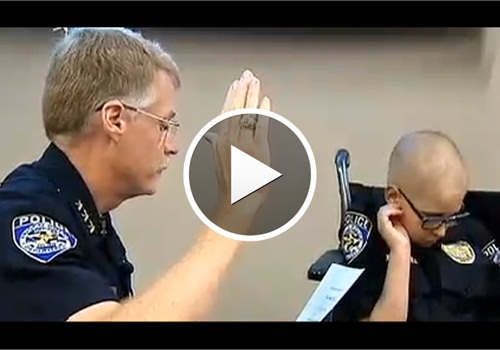 Despite living with the nightmare of cancer, a 10-year-old boy's dream of being a police officer became a reality on Thursday as he was sworn in as an honorary Frisco (Texas) Police Department officer for the day.

Kyle Murray was given a hat and official badge as part of his swearing in ceremony. He'd always wanted to be a police officer.

He was diagnosed with brain cancer at age 3 and went through treatment.

He was a five-year survivor, but was re-diagnosed in July of last year with a secondary cancer. He's now in Hospice care, KDFW TV reports.

Nieves had surgery again on Tuesday to reconstruct 12 broken ribs and a shattered sternum. He also has five fractured vertebrae in his back and neck.

Police received a complaint Monday afternoon that a man was acting aggressively toward the business owners and damaged the flag displays, Ogden Officer John Poulsen wrote in a probable cause statement.

2 Men Found with Gasoline Can Outside Chicago Captain's Home

It was not clear if the men followed the captain home. But the neighborhood is known to be home to many CPD officers. The captain’s squad vehicle was parked outside the house.

Video: St. Louis Officer Says He and Other Police Came Under Heavy Gunfire in Monday Riots

“We had to pull a police car down and get behind the engine block. We had to move some dumpsters into the street to take cover,” he said. “We had some concrete barricades and barriers, I guess from a loading dock, and then we were using brick structures that were holding a fence," he says.

Sergeant Stephen Williams, 50, was shot multiple times with what one witness described as an AK-47 while responding to an incident at a local Super 8 motel.

A suspect is in custody but has not been identified. He was reportedly apprehended at the scene by SWAT and K-9 units.

Illinois Man Charged with Bringing Explosives to Riot in Minnesota

An Illinois man has been charged by the U.S. Attorney's Office after police say he traveled to Minnesota to participate in a demonstration that quickly devolved into a riot, and that he had handed out explosive devices to people gathered and told them to throw the weapons at police.