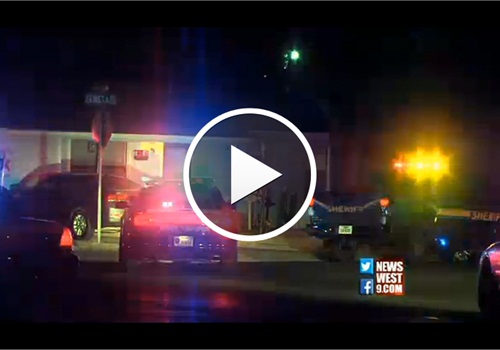 VIDEO: Texas Officer Run Over by Deputy's Vehicle During Pursuit

An Odessa, Texas, police officer was run over by a truck driven by an Ector County Sheriff’s Department deputy Saturday night, NewsWest 9 reports.

Officer Donny Rocha Jr. was assisting other officers in chasing after street racers when the incident occurred. Officers reportedly used a spike strip to pop the tires and bring one of the racing cars, a red Mustang, to a halt. The suspects in the Mustang jumped out and ran away on foot.

Officer Rocha pursued the suspects on foot and was struck by the truck of a deputy who was assisting in the chase.

Rocha suffered non-life-threatening injuries. “On the left side of his skull, he got his head cut open with I don’t know how many staples but it looks real jagged, like it got ripped open,” the officer’s father Donny Rocha Sr. told NewsWest 9.