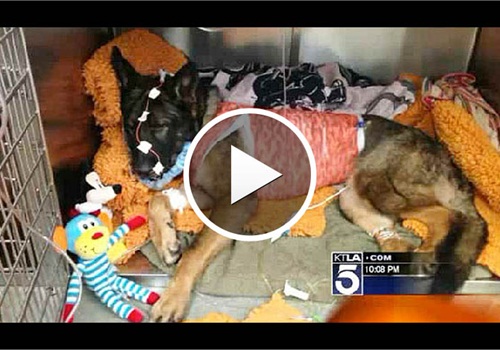 An Anaheim, Calif., police dog that was shot in the face Thursday while chasing probation suspects was able to eat under his own power for the first time Sunday in what police officials are calling “an important step to his recovery,” the Los Angeles Times reports.

The German shepherd known as Bruno also received blood from his K-9 colleagues Ares and Guenther, officials said in a statement on the Anaheim police blog Behind the Badge.

Officer Brett Klevos said doctors have removed Bruno’s catheter, and that the dog took a short walk on a grassy area of Yorba Regional Animal Hospital.

“It was exhausting for K9 Bruno, but a great sign,” Klevos wrote in an email to colleagues.

The swelling has gone slightly down in the dog's jaw, and veterinarians made a special paste out of his prescription food that he was able to consume with his back teeth, Klevos added.

Authorities have said Bruno is expected to survive after being shot in the face by a suspect he was chasing in Anaheim.