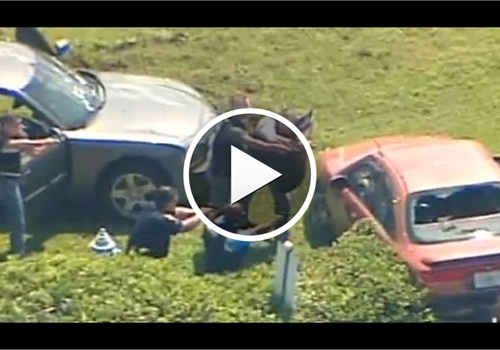 A Tampa-area sexual assault suspect who fired at police vehicles pursuing him Friday during a sprawling manhunt has died following a gun battle with officers in front of a Waffle House on U.S. 301.

Charlie Bates, 24, was hit by return police gunfire during the gun battle that was aired on live television just after noon. Bates had been wanted in a series of sexual attacks on female coeds from the University of South Florida on Thursday night. He is also suspected in several other assaults earlier in the summer, reports the Tampa Times.

After the manhunt got underway on Thursday, USF sent out at least one emergency alert to its students and posted a notification on its website that the suspect was in custody.

The pursuit began when Hillsborough County Sheriff's deputies noticed Bates driving a red sedan. As they followed him south on U.S. 301, Bates opened fire on the officers. An unmarked U.S. Marshals Service Dodge Charger nudged Bates' bumper, sending him swerving. He spun out into a grassy area, and again fired at pursuing officers.

At least seven officers returned fire. In live footage, a plainclothes officer can be seen exiting the unmarked unit with a ballistic shield. With guns drawn, the officers move toward the sedan and take Bates into custody. He was struck at least once and has died.