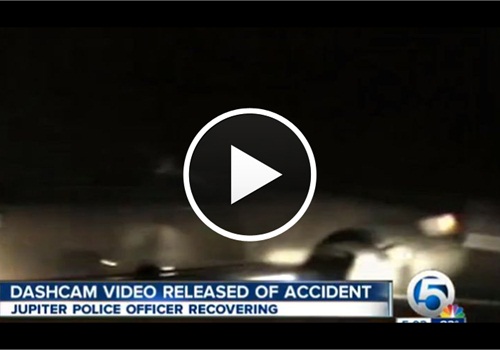 A Jupiter (Fla.) Police officer was injured Sunday when a sleeping driver struck his patrol car, sending him into a tree and rollover crash.

Officer Jason Starks was driving north on I-95, after dropping off a suspect at the Palm Beach County Jail at 4:30 a.m. Sunday when Steven Carl Klix, 30, fell asleep at the wheel of his 1999 Mercury Marquis. Klix drifted into the left shoulder, struck a concrete barrier, and veered in front of the officer's Chevy Impala patrol car, reports the Palm Beach Post.

Both vehicles skidding into a grassy area off the right shoulder. The officer's vehicle struck a tree and rolled several times. Officer Starks was treated and released for injures but suffered no broken bones, reports WPTV.