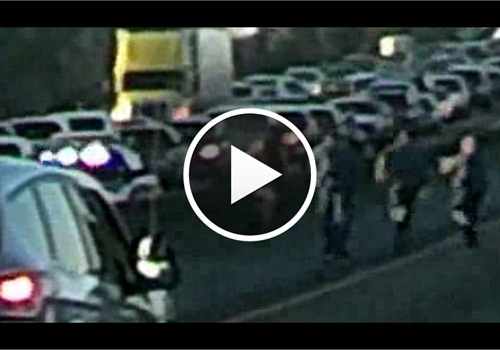 A man running across Interstate 5 in Marysville, Wash., shook off four TASER hits as he taunted officers and resisted arrest on Sunday.

The encounter went viral after a family waiting in traffic on the shut-down interstate filmed it and added colorful commentary, calling it "awesome," "amazing," and "our best Easter ever."

The unidentified man can be seen running across the interstate and being repeatedly stunned by pursuing officers. At one point the man waves his arms at the officers in a taunting way, and runs toward the Jersey barrier. Officers eventually tackle the man and place him under arrest.

The family who filmed the encounter provided the raw video to Seattle-based KCPQ. Police told WPTV that the man was under the influence of drugs.