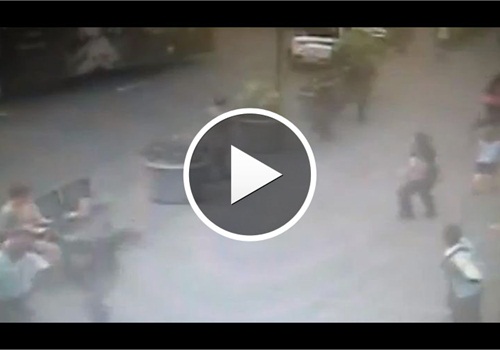 Video footage from a nearby surveillance camera captured New York City police using deadly force on the man who murdered his former boss near the Empire State Building on Friday.

The footage shows Jeffrey T. Johnson, 58, raising his handgun and pointing it at two N.Y.P.D. officers, who return fire as surrounding people scatter from the busy sidewalk near the tourist attraction.

Johnson had shot his former boss, 41-year-old Steven Ercolino, in the head moments earlier, at just after 9 a.m., on the Fifth Avenue side of the Empire State Building. After shooting Ercolino, Johnson concealed a .45-caliber handgun in a briefcase he was carrying. A construction worker who witnessed the shooting followed Johnson to the front of the building and pointed him out to officers. Johnson's gun may have jammed after he shot Ercolino, reports the New York Times.

The officers fired 16 rounds, killing Johnson and wounding nine bystanders. None suffered life-threatening injuries. Three were directly hit by police gunfire and others were struck by fragments from bullets that ricocheted off objects including concrete planters, reports CNN.

Johnson, a women's accessories designer, and Ercolino had a long-running business dispute. Until a year ago, both men worked for Hazan Import. Johnson was laid.

Johnson was facing eviction from his Upper East Side apartment, because he was no longer able to make rent on the one-bedroom co-op he had rented on East 82nd Street for about four years ago, reports the New York Post.