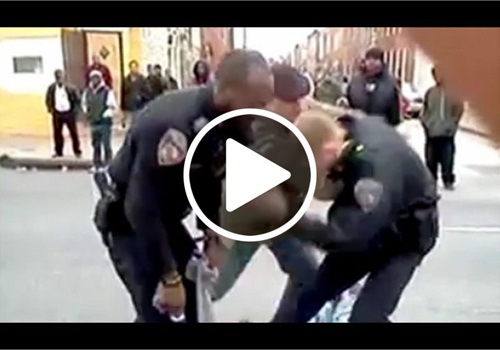 Getting into an altercation in front of people whose sympathies are, at best, suspect, is not a good thing. During my own career, I was occasionally fortunate enough to have been the recipient of some act so egregiously hostile and shocking that even those whose sympathies were largely reserved for assassinated rappers and overdosed pop stars saw fit to back my play.

But not everyone is so lucky. Take, for instance, the video of one of Baltimore's finest being attacked while trying to effect an arrest. If you've not yet seen it, please check it out (click on the above photo).

OK, so it won't make the cut for "That's Entertainment IV." But it does avail many a potential launchpad for digressive blogging. Here is mine.

I want to start with the antagonists. The people who went out of their way to make an already volatile situation more so.

First, there's Idiot Number 1: Forty-year-old Shershallan Bond-Brooks, the person passively resisting arrest. The actions of that no-good SOB Bond-Brooks directly precipitated the attack on the officers in the first place by putting them in a vulnerable position. It isn't quite Muhammed Ali versus Antonio Inoki, but it still ain't pretty. It's obvious that his "impairment" is that he doesn't want to go along with the program and is doing everything short of aggressing the officers to protract the episode and somehow make his escape. Which he does thanks to the intervening efforts of…

…Idiot Number 2: Manuel Imel, the bastard who attacked the officers in question gives "sneak attack" a bad name. Not only did he injure the officers and place them in an even more precarious predicament, he allowed the first dipshit—whose hitherto slack of compliance suggested an inability to stand up, let alone run away—to get away (if only for the moment). For his efforts, Imel received a glancing blow thanks to a boot to the head (cue this song) courtesy of a third cop. Much of this is documented for posterity courtesy of…

…Idiot Number 3: The jerk with the camera yells at the officers, "I got it on tape!" with a "nyahh, nyyahh, nyahh-nah, nyahh" zeal, hoping he would strike the kind of terror in their hearts normally associated with news of a new Rosie O'Donnell show premiering.

Truth be known, I'd like to thank God and Joe Friday that the iPhone paparazzi caught the incident on his recorder because anybody in their right mind viewing it will recognize that the officers didn't have time to screw around with the guy. Handling the moron with kid gloves would only protract the fray and possibly embolden undesired others to jump into it. It was his presence and that of like-minded bystanders who were just hoping that things would go further south - a fact apparently not lost on the involved officers.

It's not necessarily easy to Monday morning quarterback an officer's actions, but it's probably less difficult than being in his shoes when the shit hits the fan. So it's not with any particular piety that I would offer some advice for officers who find themselves dealing with some squirrelly numbnuts who's on his back and who may or may not be as drunk as he'd like you to think he is.

Don't go hands-on until you have to—preferably, only after you have someone else to help you out. Unless you're Officer Wiggum, he's probably not going to crawl his way to any escape. Even then, if he's subject to arrest as this jerk was, I would hope that you can try and use some means of incapacitating him without one of you having to tap out. In grabbing Jerk No. 1, the officer not only has his back to threats, but ultimately finds himself in the ungainly position of defending himself from an untenable posture. Doesn't BPD carry pepper spray? A baton? Lion's net? Something?

Which is not to say there's not a silver lining or two. None of the cops were seriously hurt—I would've preferred they not been hurt at all—and kudos to Baltimore PD Spokesman Anthony Guglielmi who suggested that we make the bastard famous by identifying him and putting his face out there to let the citizens of Baltimore know just what a lowlife looks like.

But you know what? I think more can be done. I believe that police unions can get together to produce an educational video exploring the matter of force. It can address the when, where, why, and how force is used, and what can be done by both the citizen and officer to mitigate its use. I can acknowledge candidly those instances where cops have screwed up but at the same time offer comment on other episodes that were unnecessarily controverted by the news media and the likes of Sharpton and Co. with nary remorse or retraction.

Since we know the news media isn't going to grant us the air time to actually run our wonderful and well-produced infommercial, we can post the video on YouTube. That way, every time a use-of-force incident starts to get some ill-warranted controversy, the link to the video could be pasted in the comments section as an implicit rebuttal to each and every asinine contention made.

Maybe that way when the next cop that comes across some bozo whose mere presence suggests a crime in progress and the forecast is incredible adversity with zero chance of backup, he'll at least have some peace of mind in knowing that he'll have the support of some members of the community.

And he can tell the others to kiss his ass.